Previous product Product 37 of 55 Next product 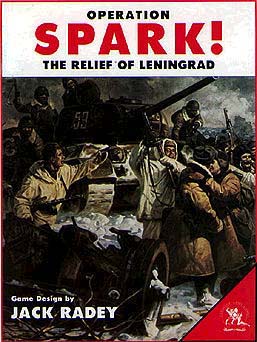 The city of Leningrad, second largest in the USSR, had been cut off by the Germans since September 8, 1941. Now, sixteen months later, the Soviets were about to make their third attempt to relieve the city. The first attack in January 1942 had led to the mauling of the 2nd Shock Army in the swamps to the south, and a second failure between Sinyavino and Mga in the summer of 1942 had also taken heavy casualties, although it had completely derailed von Manstein's planned assault on the city itself. Now in January of 1943 the Red Army was set to try again.

The game system is a continuation of the award winning Black Sea Black Death - Aachen - Borodino '41 system. The game, with one 34x22 map, is set in a frozen peat bof, bordered by a frozen lake and a frozen river, is a slugging match. German fortified lines cut through the snow filled woods and encircle the worker's settlements and the critical Sinyabino Heights.

The Red Army appears for the most part in regiment sized units of riflemen, artillery and heavy mortars, backed up by battalions of tanks (half of them light T-60s), skiers, marines, engineers, as well as by naval artillery, air power, and a few odd units like aerosans and observation ballons. The Germans have most of their units in infantry and artillery batalions, backed up by companies of Tiger and Pzkw.III tanks, deadly 88mm flak guns, and STUG IIIs. The Germans also field everything from a battalion of Spanish fascists to a railroad battery. They also field battalions of heavy artillery, nebelwerfers, and captured French coastal guns, as well as mountain troops, jaegers, the SS Polizei Division, and several overstrength independent regiments plus their Tiger tanks (here seen in their debut performance). With 560 counters.