Previous product Product 20 of 948 Next product 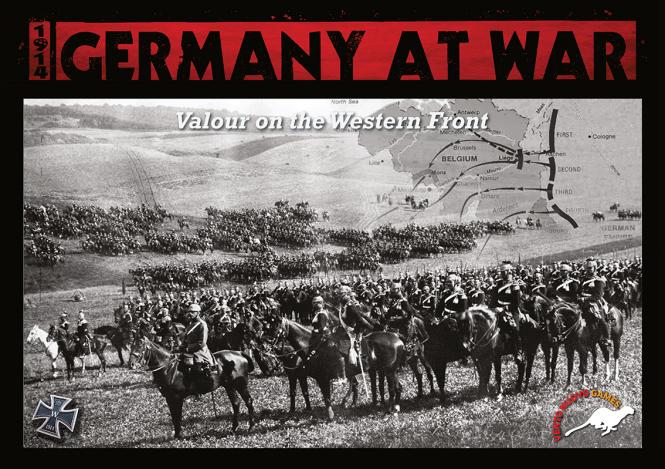 1914: GERMANY AT WAR is a light wargame covering the surprise attack launched by Germany against France in August 1914. Although based on a historical event, the players in command of the two sides can modify the course of History in early 20th Century Europe. The game is recommended for two or three players, but has excellent solitaire suitability.

Place the board in the centre of the table. The Entente Player (controlling the French, the Belgian and the British) sits at the Western edge and the German Player sits opposite him at the Eastern edge. The game is played with "Fog of War" on, so units are placed upright with the sticker facing the owning player and the enemy player cannot see them. During the game - at a certain points - some units may be revealed.

The game is won in one of the following ways, whichever happens first: 1. Sudden Death (this is a Decisive Victory and the game finishes immediately) if:

A. A Side has 10 Valour Points (White Cubes) or

B.10 German or 20 Entente units (not Garrisons) have been eliminated or

C.  a Side controls all 7 Victory Areas

2. Alternatively, at the end of the game, the player controlling the most Victory Areas is the winner (Marginal Victory).
MAPBOARD The map is divided into zones called Areas.  Every of the 94 Areas is identified by a unique symbol (GB) or a unique number (from 1 to 93) with a large circle (green, yellow or red) with a shield and a number printed over which represents the Terrain Bonus (from 0 to 4).

There are four types of units in the game: Leaders, Infantry, Cavalry and Garrisons. Leaders, Infantry and Cavalry are represented as blocks. Each has a sticker reporting the historical name, the Movement Allowance (Footstep or Horseshoes) and the Firepower (Dots or Stars). Every unit has a unique colour code identifying all units which belong to the same Army and are led by the Army Tactical Leader.

Infantry and Cavalry are all Corps or Division size formations, while Leaders represent the Army Commander. A Leader represents not only the Commander himself, but also the General staff and soldiers attached to him, plus artillery and support units. The Unit Name is the name of the unit. The Unit Name is given for historical purpose only and has no effect at all in the game.

A turn is made of a variable number of Impulses, from 2, up to unlimited. When a new Turn starts, the Side with the Initiative plays the first Impulse, followed by the other Side and so on. In its Impulse, a Side may:
A.  play a Strategic Action (SA) or

After 2 consecutive Passes (by the two Sides, one per Side), the Turn ends and a new one begins.

Impulses (Side with the Initiative first)

3. Combat Segment (TA and SA only)