Previous product Product 959 of 1295 Next product 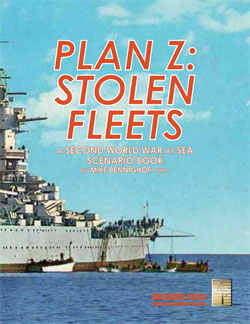 Lacking the industrial base to build all of the weapons her armed forces required, Nazi Germany relied heavily on captured equipment: tanks, trucks, artillery, aircraft and warships. The trove of armaments taken from defeated enemies, France in particular, added greatly to the German war machine’s resources.

The German Navy captured many enemy vessels, but placed none in service larger than a destroyer. In Plan Z: Stolen Fleets, the German Kriegsmarine adds battleships, aircraft carriers, cruisers and more taken from the French, Soviet and Dutch navies to its order of battle along with a few new German-built ships.

Stolen Fleets is an expansion for our Second World War at Sea: Plan Z, itself an expansion set based on the notorious but never-completed German Plan Z fleet expansion program. There are 80 new die cut, silky smooth playing pieces (60 doubled-sized ship pieces and 20 standard ones) and 30 additional scenarios extending the story of Plan Z.

Stolen Fleets is not a complete game. You’ll need Plan Z, Bismarck and Arctic Convoy to enjoy all of the scenarios.