Previous product Product 524 of 797 Next product 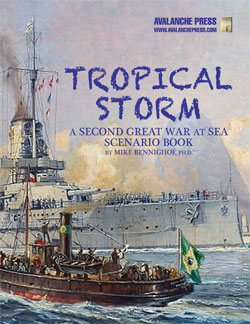 In the actual Second World War, Brazil joined the Allied Powers in August 1942 and eventually sent an infantry division and air units to fight in Italy, while Brazilian warships helped patrol the Atlantic sea lanes. In our Second Great War alternative history, Brazil is involved almost from the start, pushed into alliance with the Central Powers by an Argentine surprise attack.

We tell the story of this South American naval war that never happened in Second Great War at Sea: Tropic of Capricorn, and in its expansion, Second Great War at Sea: Tropical Storm. The Brazilian fleet is built around a motley collection of battleships built in Britain, Germany and the United States. We looked at the ships appearing in Tropic of Capricorn in an earlier installment; this time we’ll discuss the reinforcements that arrive in Tropical Storm.

Though often listed as the U.S. Navy’s first modern battleships, South Carolina and her sister Michigan were modified versions of the Connecticut-class pre-dreadnoughts. Connecticut was a semi-dreadnought type, with eight 8-inch guns in twin turrets at the “corner” positions of her central citadel. Early design studies simply replaced the twin 8-inch turrets with single 12-inch mounts, with an eye toward upgrading the six existing Connecticuts to the same standard.

Testing showed that the ship's structure could not stand the added strain of the larger weapon's firing from that location. The designers then hit on a super-firing arrangement, mounting another twin 12-inch turret above and behind those already in place. Some feared that the crew of the lower turret would be killed by the blast effects of 12-inch guns going off so close over their heads despite the turret's armored roof. Testing on board a modified coast defense monitor showed no ill effects to assorted livestock jammed into the lower turret, and the design went forward.

The South Carolina class kept the same 16,000 ton displacement 18-knot speed as Connecticut, and abandoned the medium-caliber battery entirely, with only 22 3-inch guns to defend against torpedo-boat attacks. Her hull form, armor scheme and upper works were all based on the pre-dreadnought design as well. Too slow to operate alongside the true American dreadnoughts during the Great War, South Carolina and Michigan escorted troop convoys to Europe alongside their near-sisters.

In our Second Great War story line, the Brazilians have rescued these relics from the scrap heap, for re-construction as coast defense ships. The United States is willing to sell off surplus warships, but given the needs of the U.S. Navy the better ships simply are not made available.

Despite extensive and expensive work, they’re not useful for much beyond convoy escort well away from enemy bases, and perhaps well-escorted bombardment missions. They are by no means adequate replacements for the German-built coast defense ships lost to British air attacks during the past winter.

To make them somewhat survivable in the modern naval battlefield, they’ve had their coal-burning boilers and their triple-expansion engines replaced by new oil-fueled models and modern geared turbines. Given their age and the weight of additional protection, they can just make their original designed speed of 18.5 knots. Their hulls have been widened with new torpedo bulges, and additional armor has been added over their vital spaces and on their decks.

One of our four turrets has been removed to make room for those new turbines, and the six remaining 12-inch guns have been replaced with the slightly longer and more powerful 50-caliber Mark 7 model. A new helicopter hangar and landing pad have been added over the old barbette’s location. Their secondary armament has given way to a dozen 5-inch guns in six dual-purpose twin mounts, and their torpedo tubes have been removed.

The first true American dreadnoughts, the Delaware class of two ships (the name ship and North Dakota) had been laid down in 1907 and commissioned in 1910. For comparative purposes, one (Delaware) had old-style reciprocating engines, while her sister had Curtiss turbines. Neither power plant proved very successful. Delaware was withdrawn early from her deployment with the British Grand Fleet during the First World War, while North Dakota was never sent and had her original turbines replaced in 1917.

After the First World War they did short stints as training ships and then were gladly offered up as sacrifices to the 1922 Washington naval limitations agreements. Delaware was scrapped in 1924, and North Dakota followed in 1931 after use as a target ship.

In our Second Great War story, the United States never intervened in the war and the U.S. Navy therefore never sent a squadron to the North Sea. The Vienna naval limitations treaties did not require any signatories to scrap existing warships, but the U.S. Navy put the two Delaware class ships into reserve rather than expend the money necessary to make them efficient warships - the Great Depression in this alternative history inflicted more economic pain on the United States than on the rest of the world.

When Brazil was forced into the Second Great War against her will, the Brazilian embassy in Washington immediately asked for military aid including warships. The Americans declined to offer direct assistance, but did allow the Brazilians to buy arms from American manufacturers and offered obsolete warships for sale. The two Delaware class ships, along with South Carolina and Michigan, were taken from their anchorage in Norfolk in September 1940 and moved to the nearby shipyards for re-construction along the same lines as the just-completed Florida class which were retained by the U.S. Navy.

The work took just over a year, a short span made possible by additional payments by the Brazilians. Now re-named Mato Grosso and Maranhao, they received completely new power plants, torpedo bulges and additional protection to their decks and vital spaces. They lost their torpedo tubes, and received a modern new bridge structure in place of the archaic cage masts they both had retained.

As built they carried ten 12-inch guns in five twin turrets, with two of them located on the main deck at the aft end of the ship, leaving D turret (the next to last) with a very limited field of fire. The aftmost turret, labelled E, was removed during reconstruction and replaced by a helicopter hangar and pad. The fourteen five-inch guns in casemate mounts were removed and replaced by a dozen new 5-inch guns in six of the ubiquitous dual-purpose gunhouses that had been fitted to other Brazilian battleships overhauled in the United States.

Reconstruction could not alter the outdated hull form, and even with the new turbines the two ships still only made 21 knots. They’re the equivalent of the older battleships retained by the Brazilians and rebuilt in the United States, and unlike Paraná and Paraiba they actually represent an addition to Brazil’s naval strength.

While the Americans would not sell ships out of the U.S. Navy’s current inventory (including those ships the Americans planned to activate in case of war), the Brazilians as a valued trading partner were allowed to place orders for newly-constructed vessels as long as these orders did not interfere with the delivery of new ships for the U.S. Navy.

The newly-established Ingalls Shipyard in Gulfport, Mississippi had so far been unable to win any Navy contracts, and the Brazilians gladly ordered five new Benson-class destroyers there. The same class had begun construction for the U.S. Navy in 1938 and was the current design still in production when the Brazilians placed their order.

With five five-inch guns, ten torpedo tubes and a top speed of 37 knots, the Benson class (known as the Manaus class in Brazilian service) are big, powerful boats that give the Brazilians more destroyers that can operate alongside their modern British-and German-made boats. Ingalls hurried to complete the order, eager to show the U.S. Navy that it could build warships quickly, and the destroyers were ready in time to leave the United States along with the newly-purchased battleships.

And those are the new Brazilian ships of Tropical Storm.