Previous product Product 736 of 1285 Next product 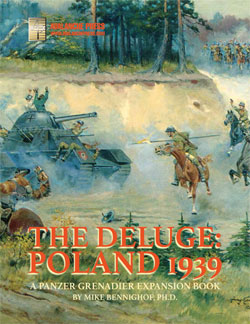 World War II began when German tanks rolled across the border of Poland on September 1st, 1939. The Poles fought back courageously, blunting several attacks, but the force of numbers and superior weapons drove them back toward Warsaw. Once the Soviet Union launched its own treacherous attack, the Polish state was doomed

The Deluge is a Panzer Grenadier expansion book focused on the battles of September 1939 between Poland's defenders and the German and Soviet invaders. There are 40 new scenarios featuring battles of cavalry against cavalry, a couple of tank battles, and best of all World War Two’s only fight between opposing armored trains. Plus of course background articles on the armies and weapons involved. You’ll need Fire in the Steppe and 1940: The Fall of France to play all of the scenarios.