Previous product Product 131 of 449 Next product 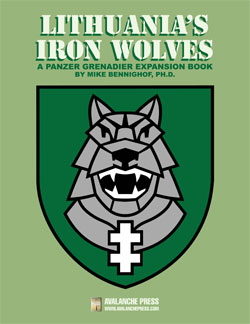 Hunting in the forests of Lithuania, Grand Duke Gediminas lay down to sleep and had a dream. An iron wolf was howling on the top of the hill under which his party camped. Returning home, he consulted Lithuania’s high priestess, Kriviu Krivaitis, who told him to build his new capital on that hill. “The symbol of the iron wolf means that the city will be large and formidable city,” she said. “The city will stand as strong as iron and will protect the land from its enemies.” And so was Vilnius, capital of Lithuania, founded. Ever since, the Iron Wolf has been the symbol of Lithuania’s defenders.

Surrounded by three hostile powers — Poland, Germany and the Soviet Union — Lithuania chose not to resist their imperialist advances during the Second World War. The Lithuanian Army consisted of but three infantry divisions, a cavalry brigade and a small tank detachment. But many within the political and military hierarchy, including dictator Antanas Smetona, wished to fight.

Lithuania’s Iron Wolves is an expansion book adding the Lithuanian Army to the Panzer Grenadier system. The 18 scenarios are based on the sort of fighting the Lithuanians saw as likely against the Germans, Poles or Soviets. They’re organized into four chapters with battle games, in our popular story-arc format. They’re not playable alone; you’ll need Fire in the Steppe, Kursk: South Flank, 1940: The Fall of France and The Deluge to play them all.