Previous product Product 190 of 980 Next product 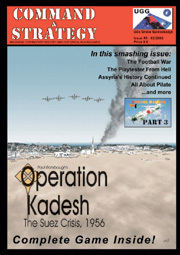 Game of the Suez Crisis, 1956. Players take on the role of the overall commanders of the Egyptian and Israeli armies, though there may be interventions by the Jordanians and Iraqis on one side, and the French and British on the other side. Units are generally brigades, with some battalions, plus there are air units available for air-to-air combat as well as city or airbase strikes. An event chit system for the pre-war diplomacy ensures that no two games are ever the same.