Previous product Product 337 of 707 Next product 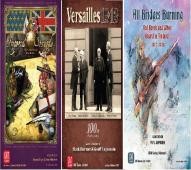 Multi-Game Update Kit Coming Later This Year. Like most of you, I don't love game errata, but over many years, I have learned that "errata happens" despite the best efforts of many smart, passionate, detail-oriented people involved in the final development and production of games. As you know, over the years, most of our game errata has involved rules or player aids, which we have addressed with Living Rules you can download and update kits when we do new versions of games.

Over the past four months since we were allowed to re-open, we've released fifteen products that we are very proud of. We think these are some of the best games we've ever created, and a few of them have potential to be long-term best-sellers for us. Unfortunately, three of those games (Imperial Struggle, Versailles 1919, and All Bridges Burning) include some minor component errata—my LEAST favorite kind—on a handful of cards in each game, a couple of map locations in two of the games, and two counters.

Now in terms of gameplay, none of this errata is a game-stopper. But it's annoying, and while many gamers find it easy to write a note in their rulebook or download living rules, that's a different and less pleasing proposition when the mistake is on a card, counter, or map.

Here are the details:

Pricing: This is nearly a free item for our customers. Because of technical reasons we have to charge a minimum amount of 0,01€.

Availability: We're getting these from GMT by the end of 2020.