Previous product Product 179 of 808 Next product 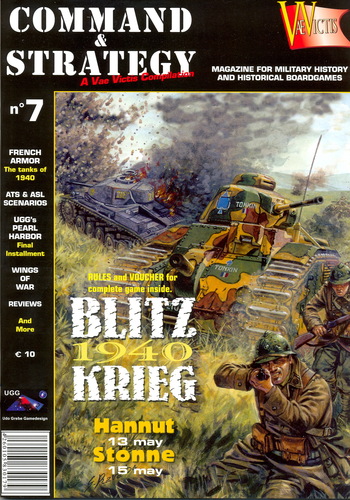 In a new format and a new box, loaded from the French magazine Vae Victis. How about:

- A complete wargame. Or two-for the price of one, actually. With die-counters. Ready to play. Read more about this below.

- Historical articels to go with said games. Long, serious stuff. Just the way you like it.

- The last installment of UGGs Pearl Harbour. A monster game in the Empire of Apokalypse series, that has been published step by step in Command and Strategy.

- Lots of stuff about your other favorite games. ASL and Wings of War suit you? Come over here...

- And of cause there are reviews and some silly stuff.

So what are you waiting fore?

Blitzkrieg 40 is an exiting medium complexity tactical level game system for two players. 1940 saw the Germans overrun France despite often being hammered in tactical battle. As Blitzkrieg 1940 will show both the battles of Hannut and Stonne were close run things. Now replay those hard fought battles on company level scale.

Hannut - The Shock of Tanks
The Battle of Hannut took place in Belgium on May 12-14. It was the first and largest tank battle in World War Two involving four tank divisions in a furious two-day melee. The game is a wild clash of 1940's armor. A decisive victory is possible every turn and if no decisive victory is obtained, the game continues for another turn...

Stonne - The Battle for Sedan
On May 14th Guderian's XIX Corps had crossed the Meuse at Sedan and the road into the French interior lay open. The next day the Grossdeutschland infantry regiment was sent to capture the dominating heights at Stonne to protect the bridgehead's southern flank. Thrugh the next days Stonne would change hands fourteen times in perhaps the most brutal fighting in 1940. It is now up to you to break through and save France or to hold on at all costs.