Previous product Product 39 of 55 Next product 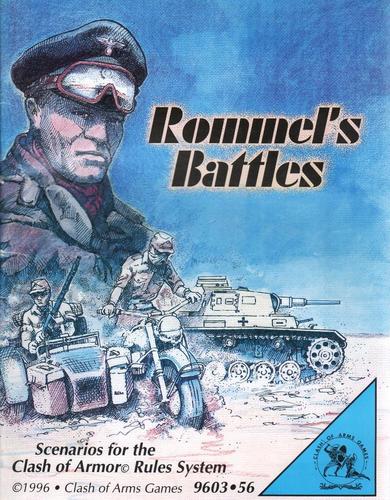 Scenarios for the Clash of Armor Rules System

Rommel! The name conjures a picture of rollingPanzer columns in the desert, led by a determined figure in a command halftrack. Trace the adventures ofRommel's commands with this new scenario book Rommel's Battles for our Clash of Armor system.

Rommel's Battles contains 6 scenarios covering Erwin Rommel's entire combat span in World War II. Players are presented with a wide scope of choices, showcasing the major actions in his career. The balanced and varied scenarios cover attacks, defense, counter attacks and meeting engagements. Each scenario has a detailed full page map and order of battle. All combat charts and vehicle data are presented in table form to further aid the players. At the end of the book is a list of miniatures required to play each scenario.

Cross the Meuse with the 7th Panzer Division in his first major engagement in WWII. Fight against the invulnerable British Matilda tanks at Arras. Who can out maneuver Rommel, the "Desert Fox" himself, in North Africa? There are three scenarios in which to try. Finally, return to France in 1944 for his final effort, a relentless battle of attrition (materialschlacht) that taxed his genius to the utmost.