Previous product Product 11 of 55 Next product 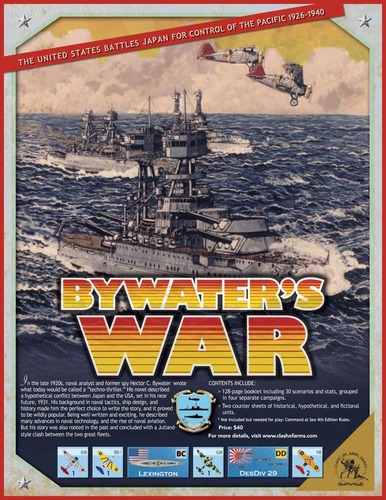 In the late 1920s, naval analyst and former spy Hector C. Bywater wrote what today would be called a "techno-thriller." His novel described a hypothetical conflict between Japan and the USA, set in his near future, 1931. His background in naval tactics, ship design, and history made him the perfect choice to write the story, and it proved to be wildly popular. In addition to being well-written and exciting, he described many advances in naval technology, such as the rise of naval aviation. But his story was also rooted in the past (including the use of poison gas), and concluded with a Jutland-style clash between the two great fleets.

Designer Bob Eldridge has transformed Bywater's novel into a gaming supplement of 30 scenarios for Command at Sea. Ship statistics include not only real-world units like the pre-war US and Japanese battleships, but also the ships that Mr. Bywater created for his story - the Alaska-class aircraft carriers and the Nagasaki-class supersubmarine. In addition he has included scenarios for another three campaigns, each determined by different historical events in 1926, 1932, and 1939. These also feature a mix of real-world and hypothetical units, like the US Lexington class, which were planned as battlecruisers until the Washington Naval Treaty.

* Not included but needed for play: Command at Sea 4th Edition Rules.