Previous product Product 85 of 515 Next product 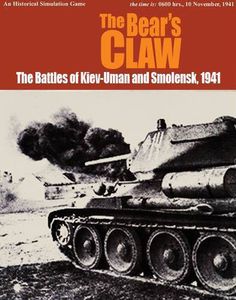 BEAR'S CLAW
The Battles of Kiev-Uman and Smolensk, 1941

Bear's Claw is two-games-in-one; featuring two separate and standalone, operational-level treatments of the German advance and Soviet counter thrusts from July to August 1941 during Operation Barbarossa.

Kiev-Uman covers the action of German Army Group South, from the beginning of Soviet bold counterattack on 26 June led by the Soviet South-Western Front comprising four full mechanized corps (more than 2,000 tanks), to the closing of the Uman Pocket on 6 August.

Smolensk covers the action of German Army Group Center, from the German 2nd Panzergruppe's crossing of the Dnepr on 11 July, followed by numerous Soviet counterattacks of the Soviet Western Front led by Marshal Timoshenko, to the climax of operations at Smolensk on 9 August.

Both games share a common set of rules and deliver a quick, yet intensive gaming experience as BOTH sides will have the opportunity to initiate attacks during play. In essence, these are not one-sided affairs as the pendulum will swing in the Soviet's favor as well as they attempt to mount several counter blows to thwart the German advance.

Bear's Claw was recently published in Six Angles magazine, issue #14 (March 2012) in Japan. This Japanese-edition release demands an English edition version to reach a wider audience of gamers, and Consim Press is pleased to announce this collabortive effort with Masahiro Yamazaki to bring his latest design and publishing effort to the English-speaking market. Unlike most Japanese reprints, we are fully honoring Mas' design and graphic prowness, so you will not have to worry about alterations to his design or tinkering with a different graphic design approach (we want to keep things as they are). Of course, the rules will be an improvement as we are addressing all errata and clarifications needed from the original release. Naturally, all rules, charts, and play aids are being fully translated and professionally-edited in English.Update: We will also be removing the Japanese text for named locations on the game map, so the game appears as a 100% English edition

With your support, expect to see future titles based on this game system coming from Consim Press and Six Angles!