Previous product Product 22 of 23 Next product 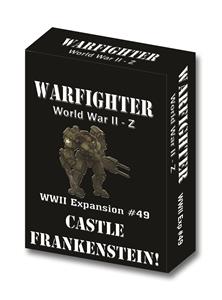 The discovery of Dieselium in the late 1930’s, even with its’ toxic instability, has driven the development of engines capable of power to weight undreamt. Nowhere seen more striking than on the Battlefield of today, where Dieselium engines drive the metal frames surrounding armored soldiers faster and stronger than ever imagined. These Augmented Infantry are taking the war to the enemy, wherever they are to be found, even to the secret Nazi Laboratory Factory under Castle Frankenstein.

1946 and the war in Europe rages on, with a powered suit of armour encasing you, carrying an array of heavy fire power will it be enough to take on the might of the Nazi War Machine?