Previous product Product 426 of 833 Next product 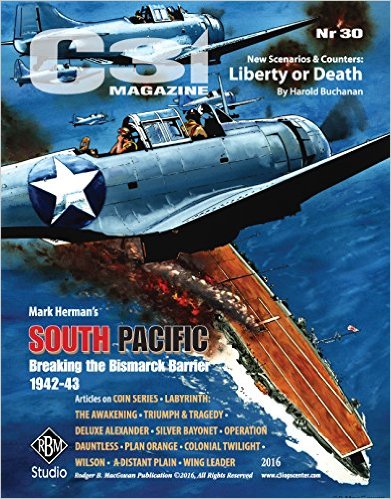 Featuring award-winning designer Mark Herman's standalone game "South Pacific," throwing you into the fight between the Allies and Imperial Japanese forces near the Bismarck Barrier during 1942-1943. Issue 30 is also packed full of articles on over a dozen games, including a series analysis on the COIN (Counter-Insurgency) genre of wargames by acclaimed designer Volko Ruhnke.

Mark Herman returns with another installment of Clio's Corner on how to qualify "victory." Harold Buchanan presents his two-player scenario and strategy guide for "Liberty or Death", along with a map display. Also included are counters to expand your gaming experience for a number of titles published by GMT Games, including a new scenario for "Alexander" (Battle of the Hellespont), "Wing Leader," "Operation Dauntless" and "Won by the Sword." [[Please contact us if you have questions about any components (counters, map, etc).]]