Previous product Product 961 of 1284 Next product 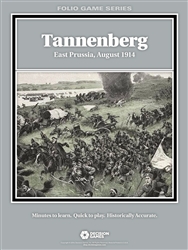 In August 1914, two Russian armies, Rennenkampf’s First and Samsonov’s Second, invaded the German province of East Prussia. The lone German army there,Hindenburg’s Eighth, had to rely on interior lines and railroads to concentrate against each Russian army in turn. This game focuses on the southern half of the campaign, with the northern half factored into the victory conditions. Those victory conditions vary with the strategic options chosen by each player so neither knows the other’s intent.

Tannenberg uses a modification of the Fire & Movement game system. Developed to portray the mechanized battlefields of a later generation, F&M stresses the use of rapidly-concentrated fire support to generate breakthroughs, followed by a rapidpenetration by mobile reserves. In 1914, although railroads allowed the rapid shifting of forces on a large scale, no one moved faster than a man on foot on the battlefield, making exploitation ineffective. However, here both players have hidden movement,allowing them to concentrate in unexpected locations to surround and destroy isolated enemy units. The clumsy and inflexible fire support is represented by the artillery brigades available to division and corps commanders. It must be brought to the point of decision, then supplied to give it the firepower to affect the fighting.

The historical outcome at Tannenberg was the destruction of Samsonov’s army, but it need not have been so. Both players have options and can achieve decisive success. The player who makes the better choices, and backs his strategy to the hilt, will emerge the victor.