Previous product Product 653 of 942 Next product 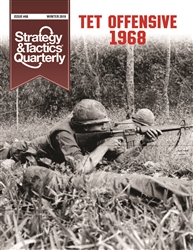 Tet Offensive: Appearances can be deceiving. In 1968, the leadership of North Vietnam was convinced victory in the decades-old war for control of the nations of Indochina. A massive country-wide offensive exploded during the lunar new year. Viet Cong guerrillas supported by regular units of the North Vietnamese army overran towns and cities across the south as the surprised soldiers of the US and the Republic of Vietnam flailed helplessly. They recovered quickly, crushing the offensive behind devastating airpower. The offensive had failed, yet we now look on it as the war's turning point in the communist favor. This is the story as told by Ty Bomba, the detailed narrative supported by plentiful maps, diagrams, weapons descriptions, and images of people and events. A map poster is included depicting the whole of the Tet Offensive across South Vietnam and a detailed infographic of the amount of men, equipment, and munitions that took part in it on the reverse.