Previous product Product 787 of 1130 Next product 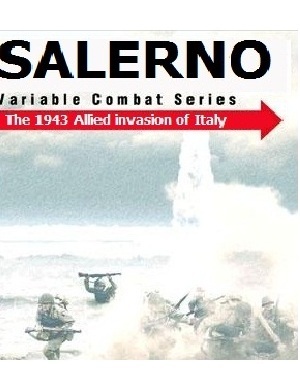 Salerno, "The next step" in Variable Combat Simulation!

MMP is proud to announce the creation of a new series of games, the "Variable Combat Series (VCS)." The Series opener is VCS Salerno, a game undertaking the nearly impossible task of depicting the 1943 Allied invasion of Southern Italy and places all of the invading forces on a single mapsheet.

The main invasion, Operation Avalanche, is portrayed on Map Section A which is 1/3 of the map at 1 mile per hex. The east coast, Map Section B, is also at 1 mile per hex and contains strategic ports, highways and the main Axis airbase of Foggia. The last 1/3, Map Section C, is drawn up at 3 miles per hexside and is used by for the other two main operations, Operation Slapstick, the capture of Taranto, and Operation Baytown, the methodical capture of the Calabrian peninsula (toe of Italy).

The maps are divided and linked by using "Transit Tracks", which represent 20-40 miles of terrain and must be controlled to maintain supply to both sides. The 6 tracks end up being the central focus to any German resistance to the invasion and the goal to any Allied success.

Allied sea power takes on a new form and ends up as one of the dominate factors and not just an abstract die roll. Individual ship counters are included to direct ranged combined support. German wire guided missles are also unveiled as the newest threat to Allied sea power and can have devestating effect.

In addition to the historical campaign, which spans 18 game turns, 3 alternate history scenarios are included. These scenarios were fully possible in the time span of the battle. They include Gavins Gambit—a planned 82nd Airborne drop behind Salerno to help drive north; Long Shot for Barletta—an airdrop by the 82nd on the east coast with a mechanized rescue force landing in Taranto; and Race for Cassino—A British/ Commonwealth, Montgommery led, Salerno invasion and a US, Patton led, Taranto invasion with the same armies just fresh from Sicily, but now on a race north to break the German Winterline.