Previous product Product 474 of 887 Next product 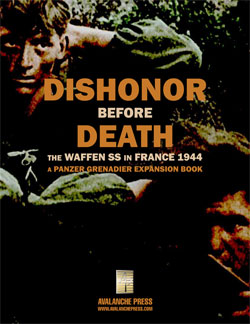 Our Panzer Grenadier: Dishonor Before Death expansion book is built around thirty scenarios by Mike Perryman, all of them set in the American-German fighting in Normandy and northern France in the summer of 1944. They’re broken into eight chapters, which tell the story of the attempts by Waffen SS party militia formations to stop the American advance.

The Waffen SS, glorified at the time by the Nazi Party’s impressive propaganda apparatus and later by frankly pitiful neo-Nazi fanboys, was not a branch of the German armed forces. It was the Nazi Party’s armed militia, and while by 1944 its favored formations received the most modern weapons Germany could provide, that alone did not make it an effective armed force against enemy troops willing to fight back.

The 17th SS “Götz von Berlichingen” Panzer Grenadier Division was typical of the militia units. Many of its men were Romanian ethnic German volunteers and French collaborators. Its officers were party activists for the most part. And, predictably, it performed terribly in combat when faced with crack American formations like the 82nd and 101st Airborne Divisions and 2nd Armored Division - but gleefully indulged in murdering prisoners of war and civilians as soon as they entered the combat zone.

Chapter One is based on the introduction of this collection of murderous criminals to the actual war. Let’s have a look at the scenarios.

Chapter One
Incompetence at Bloody Gulch
Nearly every American soldier who fought in World War Two had seen the Western flick “Destry Rides Again” with Jimmy Stewart and Marlene Dietrich, in which most of the action takes place in the Bloody Gulch Saloon. They slapped the label “Bloody Gulch” on seemingly every hotly-contested piece of ground, including the road leading past the German headquarters toward the key town of Carentan. If the Germans could seize Carentan, they could separate the two American landing beaches, Omaha and Utah, and have a chance to destroy the forces coming ashore on each in detail.

That task went to the 17th SS “Götz von Berlichingen” Panzer Grenadier Division, one perhaps the least competent formation in the Waffen SS party militia. Standing in their way, parts of the American 82nd and 101st Airborne Divisions had been dropped on the wrong location. The Americans shouldn’t have been there, and had they landed where intended the road to Carentan would have been open. Instead, the SS militiamen would have to somehow bumble their way past the paratroopers.

Scenario One
Criminal Actions
11 June, 1944
The D-Day drop left the 507th Parachute Infantry Regiment scattered across a larger area than anticipated. Long before dawn, the 150 men of HQ Company, 3rd Battalion landed fully fifteen miles north of their landing zone. When false dawn arrived, they began working their way out of the swamps south of Carentan to a church located on a nearby hilltop in Graignes. Recon patrols found no Germans between themselves and Carentan, four and a half miles away. Knowing his mission was to link up with the rest of 3rd Battalion Captain Leroy D. “Dave” Brummitt had planned to led his troops northward that night until they reached the rest of their unit. When Major Charles D. Johnston arrived and took command, he decided to defend Graignes. The paratroopers were assigned positions and waited for events to unfold. Throughout Saturday June 10th small German probes were easily driven off. The next morning was quiet until gunfire promptly ended Mass for the paratroopers in attendance. That attack was again quickly driven off but the Germans would be back.

Conclusion
At the time of the Allied invasion, 17th SS Panzer Grenadier had been located far from Normandy and while their lead elements had arrived most of their artillery was still far to the rear. When the militia entered combat at 1400 hours it appears that only two artillery pieces were available to support them. It was not enough; although the American paratroopers were hard-pressed for a spell this effort was also repulsed. At 1900 the two guns opened up again and this time one of the rounds destroyed the observation post in the church's belfry hampering the American mortars’ effectiveness. This emboldened the SS men to close with the defenders as darkness fell. It was soon all over but a hundred or more paratroopers slipped away to the south to fight another day.

Once the SS had the town, they murdered both the parish priest and the two elderly women who took care of the rectory as well as 41 other civilians. All of the wounded American paratroopers including medical personnel at the aid station in the church were murdered in addition to three officers pulled from the rubble of the Boys School, who were tortured for several hours before finally being put to death.

Notes
This is just a small scenario to kick off the action, an infantry battle in the dense Norman terrain. The Germans have numbers on their side but weak leadership, poor morale and indifferent initiative. The Americans are paratroopers.

Scenario Two
Roadside Morning
13 June 1944
On the previous day the Americans had taken Carentan resulting in a wild celebration by the inhabitants and their liberators. A small spoiling attack had put an end to the gaiety. Knowing they lacked the depth to withstand a German counterattack early the next morning the 506th Parachute Infantry Regiment advanced along the Carentan-Baupte road to add the buffer needed to consider Carentan secure.

Conclusion
The paratroopers initially made headway but a strong counterattack by the SS militiamen put an end to all forward progress. Intense fighting erupted all along the front and eventually forced Company F, 2nd Battalion, 506th Parachute Infantry Regiment to fall back without orders. This left Company D's flank exposed allowing the Germans to take them from two directions and force them back in heavy fighting. This infuriated battalion commander Lt. Col. Robert Strayer who relieved the Company F commander on the spot. While this went on Company E held their positions, allowing the battalion command staff to get control of the other two companies and push them forward enough to cover Company E's open left flank. Company F, 2nd Battalion, 502nd Parachute Infantry Regiment came forward to secure their right flank allowing the paratroopers. But eventually superior SS numbers forced the paratroopers back to the outskirts of Carentan.

Notes
The Americans are on the attack against SS men, who are not very good at war, and German Air Force paratroopers, who are. The Americans don’t have their awesome artillery in place yet, and the Germans have some armor support, so this is going to be pretty tough for the good guys despite the crapulence of the SS.

Scenario Three
Roadside Evening
13 June 1944
The German attack up the Carentan-Baupte road had slowly pushed the Americans back until Carentan itself was in danger. While the defenders inside the city prepared for battle, the majority of General Rose's Combat Command A raced towards them with no intentions letting the Germans enter the town.

Conclusion
Maurice Rose - the highest-ranking Jewish officer in the U.S. Army at the time - led his command in a devastating attack on the SS militia. The SS division could not deal with a well-coordinated combined-arms assault and suffered enormous casualties. The Götz von Berlichingen division had entered combat at full paper strength and in less than 48 hours had been rendered incapable of anything more than limited defensive actions.

Notes
The Germans have a small force of crack paratroopers to strengthen the resolve of their cracked militia, but it might not be enough. The Americans are on the rampage with a strong force of tanks and armored infantry roaring in to support the paratroopers. They have to accomplish a lot in order to win, but they have a lot of force with which to accomplish it.

Scenario Four
Stalemate Broken
13 June 1944
Carentan’s capture finally allowed the Americans to consider their beachheads secure. But settling in at Carentan was not an option as the American position lacked depth to withstand a counterattack. So early the next morning the 506th Parachute Regiment advanced south to the west of Hill 30 along the Carentan-Periers road to expand the perimeter. At the same time the Germans attacked northward with the raw 17th SS Panzer Grenadier Division. By mid-afternoon both sides had run out of gas and seemed content with the status quo. Around 1500 tanks from Combat Command A, 2nd Armor Division arrived and renewed the fight with a vengeance.

Note; This scenario uses mapboards from Invasion 1944 in addition to American and German pieces from Elsenborn Ridge.

Conclusion
The paratroopers, supported by CCA's armor, ran over, around and through the SS militia, destroying the vast majority of their offensive capability in a matter of hours. Tomorrow Hitler’s true believers would be driven farther south. The performance of SS Götz von Berlichingen had proven so poor during the fighting at Bloody Gulch the entire division was placed under the control of another party formation, as though that might help matters. Predictably that change did nothing to help and their performance never peeked above dismal.

Notes
The Americans are attacking in a different sector, with more paratroopers supported by a purely armored force; the Germans don’t have that airborne stiffening this time so it’s up to the militia to fight off the Americans all by themselves.

And that’s Chapter One. Next time, we look at Chapter Two.