Previous product Product 373 of 840 Next product 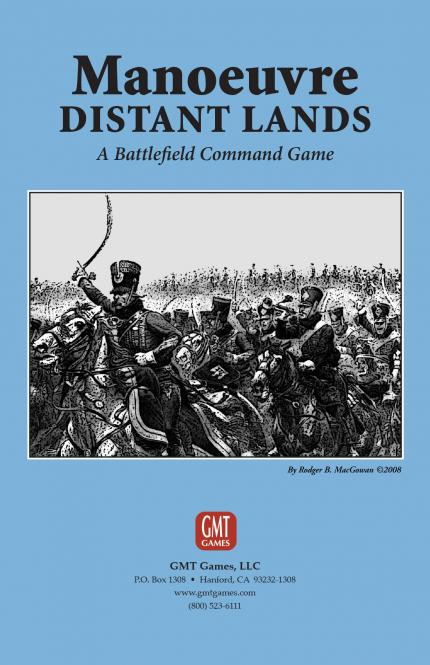 The regiment had fought countless battles across the European continent. War had been waged in Bavaria against the Prussians, Catalonia against the Spaniards, under the great pyramids against the relentless Turk and even at New Orleans against those upstart Americans. Now new challengers have arisen and a completely foreign army is arrayed across the battlefield. The Tri-Color fluttered in the breeze as rocket shells burst in the air. A new type of warfare was about to be unleashed.


Manoeuvre: Distant Lands is an expansion for Manoeuvre. Four new armies are included to allow you to bring the fight from the frozen north to the sub-continent and the mythic east. Included in this set are counters and cards for Sweden, the splintered Kingdoms of India, the Chinese 8-Banner Army and the crumbling remains of the Japanese Shogunate. Also included is a set of 8 new land tiles that will force veteran players to learn new tactics among the swamps and fields of the Orient as well as the forests of Scandanavia.

Sweden: The Swedes are reminiscent of the more traditional European powers and fit nicely into the current game hierarchy to allow for more balanced tournament play. The Swedish army fits the mold of both the Prussians and Russians but falls into line just below them in overall strength.

Indians: The Kingdoms of the Marathas, Mughals, Mysore and Sikhs from the Punjab have banded together to overthrow the colonial powers of the day. Their problem is overcoming the lack of a true leader that makes it difficult to set aside their rivalries and squabbling. They have speed rivaling the Ottomans but far less of a capacity to use it well. They are a true guerilla force adept at denying their opponents resources or freedom to maneuver.

Tokugawa Shogunate: The Shogunate is crumbling. The army seeks to modernize against the will of the Shogun and in a few years Japan will step into the Industrial age. However, at the turn of the 19th Century, insular clans still dominated the military. Every Daimyo leads his own army into battle with their own guns, cavalry, samurai and teppo. Only the Shogun can be called on to make any Clan work with another. Beware the deadly fury of the Banzai charge and even cornered units will fight to the bitter end and the last man.

China: The Chinese 8-Banner army boasts a core of elite units, including three cavalry units that can stand their ground against any European foe. Unfortunately, the Han conscripts and the peasants that form the Tuan Lian are ill-suited and under-equipped in relation to their Manchu and Mongol horsemen. Will rockets and witchcraft bring disruption to the orderly European battlefield.

"I have not imagined that the Napoleonic experience can be brought to the orient!"
- Thunder Wong, Playtester Extraordinaire