Previous product Product 577 of 1284 Next product 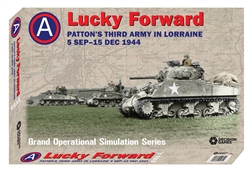 Lucky Forward: The Lorraine Campaign This GOSS series game presents Third Army’s Fall 1944 offensive to just before the Germans launch their Ardennes Offensive further north. The battles of Metz, Fort Driant, and the German counteroffensive attempt against Patton using the new German Panzer Brigades are included. Smaller scenarios allow players to game smaller periods of time in each of the four months making up the campaign. Variant counters are included for an optional airborne operation. The game maps mate to Wacht am Rhein (2012), allowing more options for both simulations. Five maps, 12 counter sheets.