Previous product Product 383 of 957 Next product 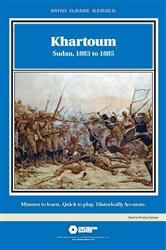 Khartoum: Sudan, 1883 to 1885. The Mahdist rebellion swept over the Sudan in 1883, destroying an Egyptian army under the command of the British General Hicks and endangering Khartoum on the Nile. The British government dispatched General Charles “Chinese” Gordon to hold the city.
This is a two player game using of Hand of Destiny series rules. One player commands the Mahdist forces, ranging from tribal levies to well-armed regulars, with the objective of taking Khartoum. The other player controls the Anglo-Egyptian forces consisting of British regulars, Egyptian army units, and mercenaries with the goal of relieving the forces under Gordon who are trying to hold Khartoum.
Each player has a set of cards providing additional units and special actions. Careful use of the cards will help achieve victory.