Previous product Product 295 of 946 Next product 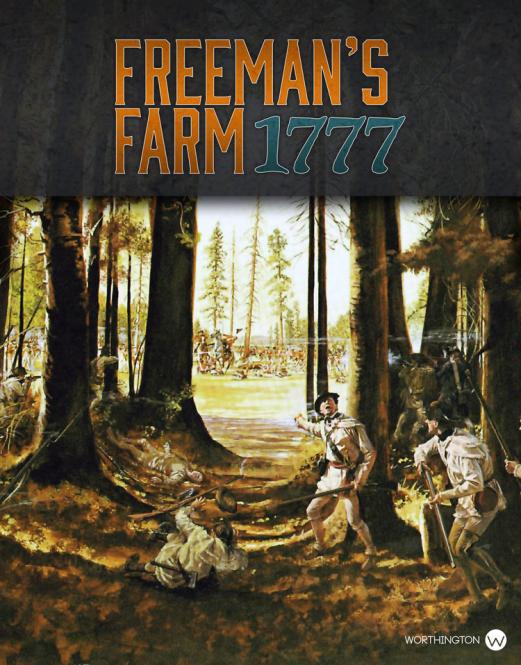 Freeman's Farm: 1777 is an Old School War Game with an Old School look!  Military style map with military formations and a vintage layout. Created and Designed by Maurice Suckling.

An innovative card driven board game on the Battle of Freeman's Farm.  1 - 2 players.  Playable in 1 hour.

Freeman's Farm: 1777 is the first game in our new Battle Formations game series. These games are a new game system  centered around battle formations and have been designed for solitaire and two players .  In solitaire mode players can play as either the American or the British against the solitaire player game engine.

Players decide which formations to activate and how far to push it once it begins attacking. Push it just enough and they can win the day.  Push it too much and failing a morale test will break it.

Freeman's Farm has been designed for easy set up and quick game play. Game unit placement is shown on the game board and units are wooden markers representing troop and artillery formations.

Both sides require you to make hard choices on which formations to activate, how long you want them to press their attacks, and when and where to move them.  Building momentum with your formations is important.  Choosing how to use your momentum is critical.  Use it well and your formations can break the enemies formations in a closely contested fight.  Squander your momentum and the battle is lost.  The decisions are yours…