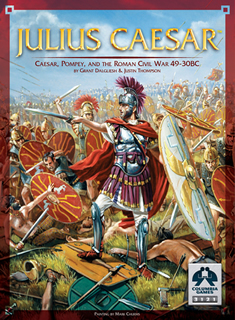 Julius Caesar brings the drama of the Roman Civil War (49-45 BC) to life. Players take control of the legions of Caesar or Pompey and fight to determine the future of Rome: republic or empire. Marc Antony, Cleopatra, Octavian, and Brutus also play key roles.

The map board depicts the major theatre of operations during the Roman Civil War.