Previous product Product 101 of 960 Next product 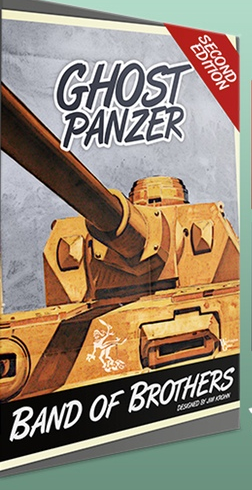 Band of Brothers: Ghost Panzer is a fast playing game of squad level combat in WWII. It covers the exploits of the German 11th Panzer Division in Russia from 1941 to 1944. The rules are very simple (no combat charts are needed) with very few exceptions to remember and yet the game is meant to be all encompassing and will include infantry, tanks, and artillery.

Ghost Panzer is a STAND ALONE GAME, but is also the second in a series.

A stronger and larger box. All of the maps will have the new remastered artwork and will be mounted. An up-to-date series rule book. Full counter sheets – include extra counters. An improved, graphical player aid card. All known errata will be incorporated in the new edition