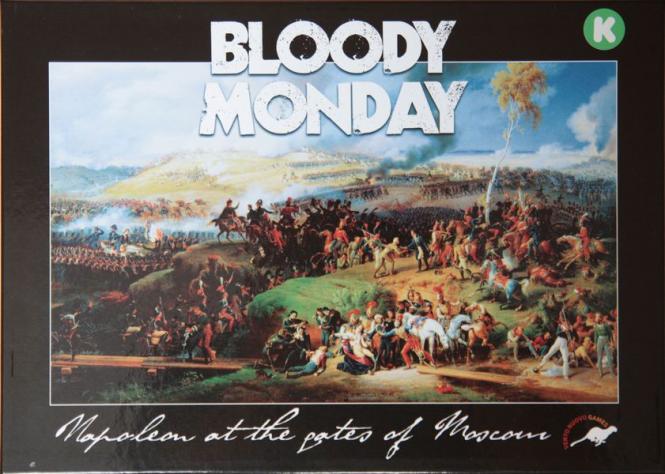 “So what is the single bloodiest day of all the Napoleonic Wars?”

But no. The single bloodiest day of all the Napoleonic Wars came in 1812, in the desperate battle before Moscow, where 250,000 troops fought and 70,000 became casualties.

Borodino. The name that has graced many wargames, but few that are remembered fondly. It is a difficult battle. Too many troops. Too confined terrain. To much... something.

Using game lessons from our popular Moscow ’41, and a lifetime of study (including visiting the battlefield), VentoNuovo brings you the game on Borodino that gives both sides challenges and choices, and can be finished in a few hours.

You command the powerful Grande Armée, made up of French, Polish, Italians, and a host of German States. Or let the venerated Marshal Kutuzov place the mighty army of the Czar into position for a powerful defense (and always looking for a chance to counter-punch.)

Historically, both sides fought with valour and desperation, and both leaders made large mistakes. Can you change history?

Bloody Monday gives both players a range of challenging decisions... each impulse of every turn. Wooden blocks and colourful PVC stickers represent your troops and the command structure, providing both easy bookkeeping of unit strength and abilities, plus “fog of war” that forces players make choices without knowing more than a commander gets to know.

Bloody Monday begins after both sides have skirmished and changed positions and dug in for two full days. The French have captured the Shevardino Redoubt and stand ready for their full assault, aiming to smash the Russian Army and force a peace on the Czar. The Russians have strong natural defenses on their right and a series of earthworks strengthening the centre, but not their left. Both players have powerful forces, ranging from crack troops to depleted units, militia, and thousands of Cossacks. Command rivalries complicate both sides.

What happens here can change everything!

If Napoleon had really smashed the Russians at Borodino, the Czar might well have been ready to negotiate. If Kutuzov had used his forces better, Napoleon might not have taken Moscow and been removed from power two years earlier.

The future of Europe hangs in the balance.

The units are portrayed by over 100 colourful, precision-cut wooden blocks, in large 20mm size PVC stickers.

The Kickstarter Edition has in addition:

A second rules manual and a second set of stickers (icon stickers). The icon art has been drawn by the famous French artist André Jouineau.