Previous product Product 136 of 424 Next product 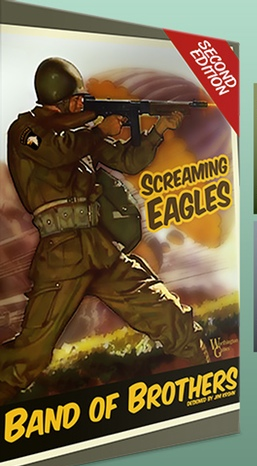 Fight with the 101st Airborne in Europe in 1944-45 through some of the toughest fighting in WWII.

Stronger and larger box. All of the maps have the new remastered artwork and are mounted. An up-to-date series rule book. New and extra counters. An improved, graphical player aid card. Counters and scenario book updated to the new Proficiency system.

What is the benefit of the updated Screaming Eagles Counters?

Band of Brothers is a fast playing game of squad level combat in WWII. It covers the exploits of the 101st in their battles from D-Day through the Bulge. The rules are very simple (no combat charts are needed) with very few exceptions to remember and yet the game is meant to be all encompassing and will include infantry, tanks, and artillery.