Against the Odds 7 A Dark and Bloody Ground

Previous product Product 27 of 450 Next product 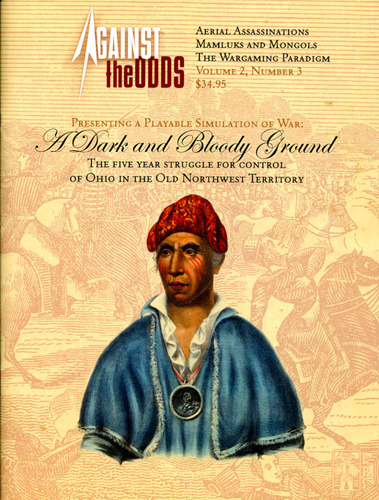 "The Governor of the Western Territory had power, in case of hostilities, to call upon Virginia and Pennsylvania for a number of men to act in conjunction with the Continental troops, and carry war into the Indian settlements."

Governor Arthur St. Clair, in a letter to President Washington, Fall of 1789.

"For God's sake retreat! You will all be killed. There is Indians enough to eat you all up!"

The newly formed United States faced a challenge with its western territories. Many of the soldiers and colonists of the original 13 colonies looked forward to settling the regions along the Ohio River, but the new nation lacked the resources and force to rapidly expand into the areas beyond the Appalachian mountains. Further, the British had not withdrawn from their western forts, in clear violation of the Treaty of Paris, 1783. Great Britain sought to maintain the lucrative fur trade with the native residents, as well as to put pressure upon the new, upstart nation. As armed clashes and atrocities between settlers and natives increased in ferocity, the way of the warpath led increasingly to the dark and bloody ground of the Ohio frontier.

A Dark and Bloody Ground is a simulation of the five year struggle for control of Ohio in the Old Northwest Territory. One player assumes the role of the leader of the United States armed forces (militia and regular US Army), while the opponent operates the various Native American nations, and their potential allies from Great Britain and Canada. The game can, however, be played solitaire with little effort.

A Dark and Bloody Ground and issue #7 of ATO