Previous product Product 14 of 22 Next product 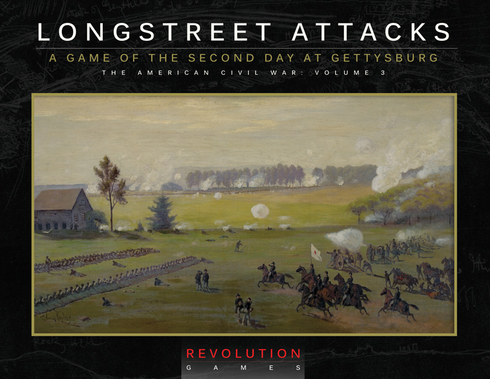 Longstreet Attacks: The Second Day at Gettysburg is the third game in the Revolution Games series of American Civil War games. The first being Stonewall's Sword and the second being Thunder in the Ozarks.

Longstreet Attacks: The Second Day at Gettysburg simulates the fighting on July 2nd, 1863 during the second day of the Battle of Gettysburg and focuses on the southern portion of the battlefield. These engagements involved General Longstreet’s attack against Sickles’ positions, with troops from Hood’s and McLaws’ Divisions, assisted as well by Anderson’s Division of A.P. Hill’s Corps.

The Round Tops (Tutorial) – a small, limited battle depicting the fighting around the Round Tops and which serves to teach the system to new players.

The Whirlpool-The battle for the Wheatfield, Devils Den, Peach Orchard and Houck's Ridge. 4:20pm to 7:20pm

Assault on Emmitsburg Road-The battle for the Peach Orchard and Cemetery Ridge. 5:40pm to 8:20 pm

Sickles Stays Put -What if scenario with Sickles troops in their more conservative original locations. 4:00pm to 8:20pm