This online shop is using cookies to give you the best shopping expierience. Thereby for example the session information or language setting are stored on your computer. Without cookies the range of the online shop's functionality is limited. If you do not agree, please click here. x
You are here: / By Manufacturer / NAC Wargames
Back to overview 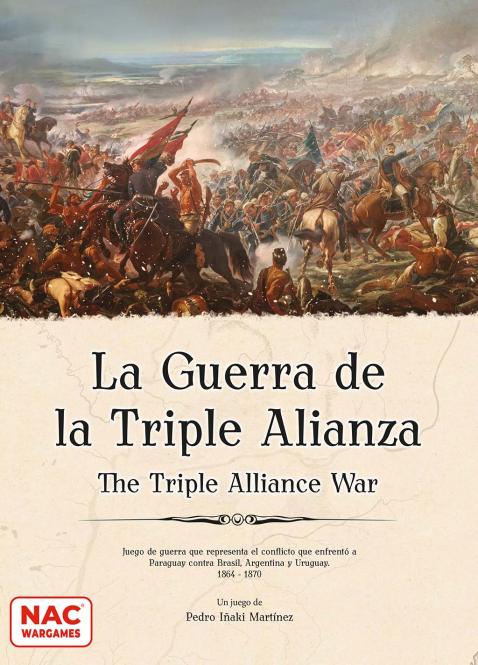 In this wargame for 2 players, ages 14 and up, recreate the war that pitted tiny Paraguay against the Brazilian Empire, Argentina, and Uruguay.

When Brazil invaded Uruguay in 1864, no one could have foreseen that this act would spark the largest conflict in the history of South America. Paraguay entered the war in defense of Uruguay while Argentina allied with Brazil. Uruguay itself, once conquered, switched sides and declared war on Paraguay. Thus was born the Triple Alliance. Despite having a small population, little territory, and few resources, the Paraguayans fought with unexpected tenacity.

First they embarked on daring offensives, then they were forced to fight massive defensive battles, taking an unsustainable amount of losses. After seven years of arduous fighting, the Paraguayan army participated in its last battle at Cerro Corá, the only town left to be conquered by the Alliance. At the last stage of that desperate battle, Paraguayan President Solano López committed suicide while cornered by Brazilian soldiers. Material and human losses were astronomical on both sides. It is said that more than 90% of the male population in Paraguay died during that colossal war. Even the victorious countries were brought to the brink of exhaustion – to such an extent that Brazil is, to this day, still in debt.

Surprisingly, this war has never been represented in a game of its own. It is high time to bring this conflict to the forefront of the wargaming scene, not only so that fans of the genre can have the chance to recreate this conflict and explore different strategies, but also so that the general public can become more informed about such an important historical event in a simple way. For this reason, War of the Triple Alliance prides itself on two basic principles: historical depth and simple rules.

• It only takes 2 hours to recreate this massive conflict.

• Simple rules make the game’s concepts easy to grasp for all types of players.

• Quick and intense games with special attention paid to the details of the map and illustrations of the armies.

• Historical accuracy. Includes a playbook that provides a detailed summary of the outbreak of the war, how it developed, and its aftermath.

Here you can find the Rules: