Previous product Product 90 of 378 Next product 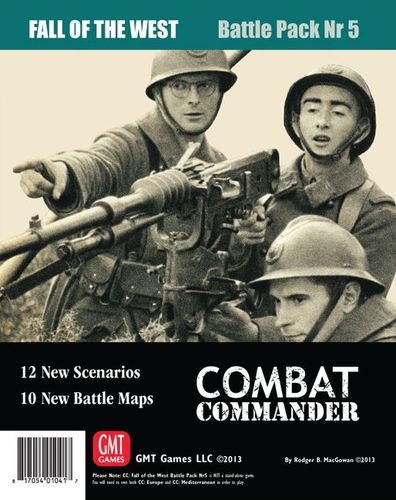 Combat Commander: Battle Pack #5 Fall of the West is the fifth themed collection of scenarios for use with the Combat Commander series of games. The theme of this Battle Pack shifts to actions in France, Belgium and Norway from late April to June 1940, looking at critical moments in this brief span where the forces of both sides tested each other sorely. To reflect this, the scenario special rules are designed to make the Allied Minor hand exhibit flexibility (which was demonstrated whenever higher echelon interference was reduced). CC The Fall of the West features twelve new scenarios printed on cardstock as well as ten new maps.

Special experimental AFV Rules are featured in four of the scenarios where tanks are facing infantry in settings that reveal how the doctrines, armaments and countermeasures were still early in development. While unfettered races by companies of tanks across the countryside remain a landmark image of the blitzkrieg, we found many instances of a more tentative level of engagement, suitable for our attempt at capturing an unusual element in the CC scope: TANKS!

The new maps depict specific locations in France, Belgium and Norway, which have been located and specifically verified (from the sky, maps and in texts). The player will discover the actual names of roads and other terrain features as a reminder of the reality of the events.

The scenarios included in CC Fall of the West are:

74 “Sturmgruppe Granit” starts with the daring glider landings on top of Fort Eben Emael and serves as the opening to the Fall of the West, 10 May 1940;
75 “Sturmgruppe Beton” set near Maastricht, Belgium with another element of the glider landings facing fierce counterattack by Belgian forces , 10 May 1940;
76 “A Most Gallant Dirty Little Imp”, set at the Dyle River, Belgium, featuring heroic leadership by the first winner of the Victoria Cross in WW2, 15 May 1940;
77 “The Crucible of Fire” set at Petegem, Belgium, during the early tactical withdrawal of the BEF features the Bren Carrier, 21 May 1940;
78 “By These Deeds They Shall Be Known” set in Cassel, France during the desperate rearguard work by the BEF to protect the Port of Dunkirk, 27 May 1940;
79 “Battering Ram at Kvam” set in the Gudbrandsdal Valley in Norway with valiant British defenders facing heavy German assault by tanks and bombers, 26 April 1940;
80 “Bitter Isthmus” set at the French frontier town of Montherme, showing that locally the French were equal to the test set before them, 14 May 1940;
81 “The Bottleneck” set near Sedan, France in a fluid seesaw moment during the swift German advance - features the FCM 36, 14 May 1940;
82 “Hidden Guns Lash Out” set at the outskirts of Gembloux, France, where defiant, capable defenders held off a major German assault features the PzKfw III, 14 June 1940;
83 “Thrust in the Dust” covers the zenith of the heroic French anti-tank defense of Gembloux, facing waves of German armor, 15 June 1940;
84 “Seize the Canal” set at Chateau-Porcien, France on the River Aisne, with a heavy urban assault by German forces seeking to breech the river line, 9 June 1940;
85 “The Striking Hammer” features a major armored counterattack against the German-held positions at Perthes, France features the Char B1bis, 10 June 1940;