Previous product Product 38 of 125 Next product 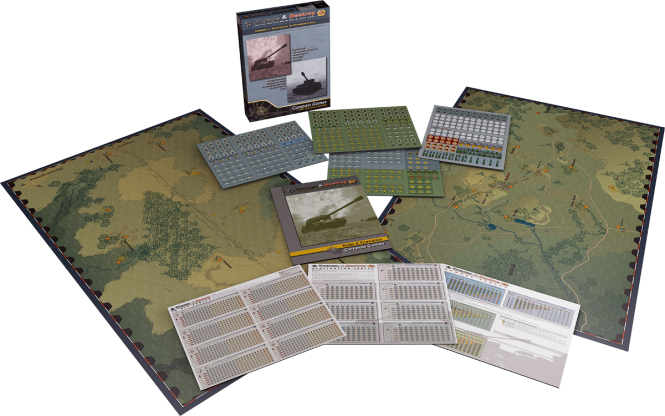 Engage & Destroy is a simulation game of tactical armored warfare in World War II, 1939 to 1945. Underlying Engage & Destroy is a comprehensive set of models that generates the game data for each of the units used in the game so that the game subsumes most of the complex calculations allowing the players to focus primarily on combat tactics.

Players play in turns using pulses, with each turn representing two minutes of actual time. Players draw and play chits, the interaction between them outlines who can move and engage with their units. When all units in the game have moved and/or performed a combat action, or both Players consecutively PASS the turn ends. Combat is instantaneous.

Engage & Destroy combat situations are presented in near-historical context, which balance resources and capabilities between the players making the game contest of skill rather than a match between unbalanced order of battles, allowing the game to portray period type engagements in a skill contest format.

There are three types of games in Engage & Destroy: Meeting Engagements, Assault, and Firefight. In meeting engagements, players must take and hold locations, gaining more points than their opponent before the game ends. In Assault, one player must push a defender back behind a series of defense lines before the game ends. In Arena, it’s a pure shoot out, with the player who earns the most “kill” points winning by game’s end.

Engage & Destroy is designed to take less than an hour to play, and often less than 30 minutes between experienced players.

2 maps - battlegrounds of the eastern front