Previous product Product 6 of 124 Next product 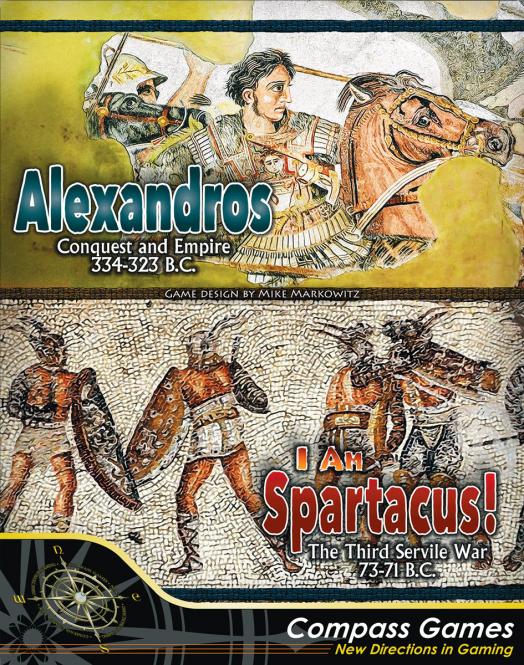 Alexandros and Spartacus features not one but two great ancient games designed by Mike Markowitz that originally appeared in Command magazine in 1991 and 1992, garnering numerous Charles S. Roberts Award nominations and awards — Alexandors and I Am Spartacus. This expanded edition features both games along with their multiple expansions, three in total, to round out this impressive, DELUXE package with two full-size game maps and updated graphics throughout.

Alexandros: Conquest & Empire
This Mike Markowitz design originally appeared in issue 10 of Command magazine in 1991 to immediate acclaim. It earned a final nominee spot for the Charles S. Roberts Award for “Best Graphics,” and won the award for “Best Pre-World War II Game.”

It covers all of Alexander’s campaigns from 334 to 323 BC. One player commands the Macedonians and the other the Persians. It’s easily adaptable for solitaire play. The area map is based on the province boundaries of those times, and game turns are quarterly. Combat can be fought tactically, using a separate battlefield display with units assigned to various sectors of the engagement. There are also special rules for besieging cities.

Play lasts a variable numbers of turns, depending on the course of the larger war. There are several ways to win, including the killing of enemy leaders and conquering a large mass of territory, which can end the game at any time. Otherwise, play continues to the summer of 323, when Alexander actually died historically. An optional rule allows play to go to 318.

There is one 34x22” area map, 180 iconic counters, a playing time of about three to four hours, and complexity is low-medium.

BONUS MATERIAL: Also included, are two expansions that were published in later editions of Command Magazine.  These are Successors: Clash of Generals, 323-301 BC and Xenophon: March of the Ten-Thousand, 401-400 BC.

I Am Spartacus: The Slave Rebellion Against Rome, 73-71 BC
This second featured game design by Mike Markowitz originally appeared in issue 15 of Command magazine in 1992. The game earned a finalist spot for the Charles S. Roberts Award for “Best Pre-World War II Game.”

This is a two-player (solitaire adaptable) simulation of the Third Servile War, the slave revolt that shook the Roman Republic from 73-71 BC. Barring the capture of Rome by the Rebel player, or the capture of Spartacus by the Roman player, both of which are sudden death victories, the game is won on points for territorial control and other issues. At the end of 17 turns, the player with the most points wins.

There is one 34x22” area map based on the provincial boundaries of those times. Complexity is low-medium, with 189 iconic counters.

BONUS MATERIAL: Also included is yet another expansion from a later issue of Command Magazine entitled Pyrrhic Victory: Legion vs Phalanx, 280-275 BC, and several historical and informational articles on the period.