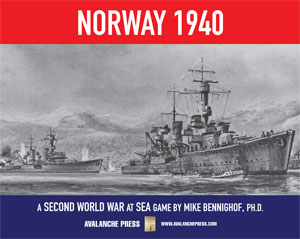 In April 1940, the German Navy launched a daring air and naval assault on neutral Norway. After eliminating the small and aged Norwegian fleet, German warships landed troops at all the key Norwegian ports. The British Home Fleet struck back quickly, landing British, French and Polish troops to bolster the Norwegian defenses. By June the campaign was over with Norway firmly in German hands, but at the cost of three cruisers and ten destroyers lost from their already small fleet.

Norway 1940 is a Second World War at Sea series game based on this intense three-month campaign. It features a brand-new map of Norway and the surrounding waters, and 420 brand-new playing pieces (140 “long” ship pieces and 280 merely standard-sized ones). And of course the Second Edition series rules with full-color playing aids.

This is the first time that Second World War at Sea has addressed this vital naval campaign. The Royal Norwegian Navy is fully present, with the ancient coast defense ships and torpedo boats that made up its strength in 1940, and the modern destroyers with which it hoped to augment its strength but lay incomplete when the Germans attacked.

The entire German Navy participated in the assault, and so the entire German Navy of April 1940 is present in the game from the ancient pre-dreadnought Schleswig-Holstein through the modern battle cruisers Scharnhorst and Gneisenau. The Royal Navy is heavily represented, along with the French and Polish ships that fought alongside them.

The scenario set, organized in our history-rich format, tells the full story of the Norwegian campaign in 40 scenarios. Everything’s there, from the German disaster in Oslofjord to the battles of Narvik to the tragic end of the British aircraft carrier Glorious.