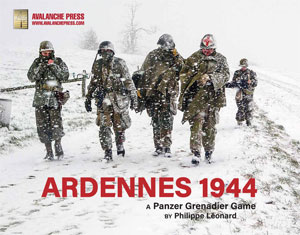 The German plan for the Battle of the Bulge gave a major role to an armored battle group of the SS Lifeguard Division commanded by the war criminal Joachim Peiper. Peiper failed spectacularly, losing three-quarters of his men and all of his tanks, as American forces destroyed his criminal band.

Panzer Grenadier: Ardennes 1944 is a game based on this American victory, as well as the January 1945 fighting to reclaim St. Vith and other areas taken in the German offensive. Peiper would be lionized after the war by Nazi apologists, but designer Philippe Léonard lays bare the truth of the campaign: American soldiers threw back the vaunted Waffen SS and exactly one week after his advance began Peiper ordered his men to abandon their vehicles and flee the battlefield.

Ardennes 1944 is one of the very best of the Panzer Grenadier series. It’s filled with more historical background content than we’ve ever put in a game before, and a huge total of 68 scenarios plus battle games to tie them together.

There are eight 11x17-inch rigid mapboards, innovatively designed by Philippe Léonard to both display actual terrain features of the campaign and be fully compatible with the more generic maps of other Panzer Grenadier games. And 517 die-cut and silky-smooth playing pieces showing the Waffen SS, German Air Force and German Army troops and weapons, and the U.S. Army soldiers who defeated them.

Ardennes 1944 is an exceptional game. This is why you play wargames.