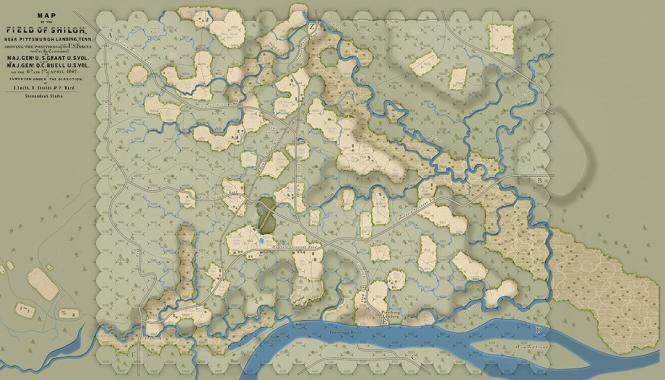 Battle Hymn: Volume Two is the long-anticipated sequel game release to Volume One and includes two complete games: Shiloh and Bentonville. Battle Hymn is the new brigade-level system based upon the latest research into Civil War combat. This new entry introduces a new solitaire system to the series and an extension map for Gettysburg (Volume One) for a complete alternative history of the entire battle. Designed by Charles S. Roberts Award-winning designer Eric Lee Smith.

Shiloh: The First Great Battle depicts the two-day battle of Shiloh. The Confederate army surprises the Union forces of General Grant and a fierce battle blazes for two days, with first the Confederate on the offensive and then the Union turning to the attack on the second day. Shiloh shocked to the nation. Left dead or injured were more men than in all of America’s previous wars combined. The game includes four scenarios.

Bentonville: The Last Great Battle simulates the final major battle of the war. Sherman is marching through North Carolina when a surprise attack by the much-weakened Army of Tennessee catches one wing of the US army exposed. The first day ends in a bloody stalemate, and continues on for two more days. Can the Confederates escape? This game has both two-player and solitaire scenarios, and introduces an innovative new solitaire system to the game series.

Bonus One—Gettysburg ’62: No Lost Orders depicts an alternative history—the Confederates do not lose their orders for the 1862 invasion, Antietam never happens, and Jeb Stuart’s cavalry begins the battle of Gettysburg with a major engagement south of the Round Tops. The battle grows as a Union corps arrives to face off with Heth’s Division.

Bonus Two—the Gettysburg extension map attaches to Gettysburg: The Tide Turns making for a complete alternative history of the entire battle. Plus, a new scenario explores the alternative that Pickett’s Charge never happens; instead the Confederates drive south around the Round Tops on their way to Baltimore.