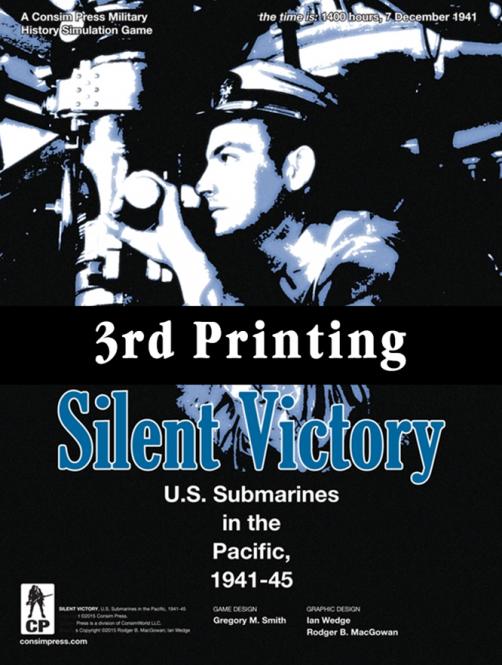 U.S. Submarines in the Pacific, 1941-45
"Execute unrestricted air and submarine warfare against Japan."
the time is: 1400 hours, 7 December 1941
Silent Victory is a solitaire tactical level game placing you in command of an American submarine during WWII in the Pacific. Your mission is to destroy as much Japanese shipping and as many warships as possible while advancing your crew quality and decorations - all while remembering you have to make it home.
Silent Victory is purposely designed to deliver a brisk yet intensive gaming experience that forces many decisions upon you as you take command of one of the major U.S. Fleet submarine types in service. Patrols will take you to differing parts of the Pacific as time progresses in the war. The most successful commanders will be those that can manage the risks they take while prosecuting as many targets as possible.
The game engine is built upon the successful The Hunters design and has proven to be a solid, playable experience. All the major U.S. Fleet boat types are accounted for with every level of detail including period of service, armaments, crew makeup, damage capacity, and more.
As a Fleet submarine commander, you will be confronting many decisions during your patrols. To begin with, seven U.S. Fleet submarines are profiled and available for you to choose from. Patrol zones reflect the changing operational areas as the war progresses, from the Philippines to Midway, the Solomons, and even patrols to the waters just off the coast of Japan and China.
Conducting patrols is the heart of the system, as you will be resolving encounters against individual ships, convoys, or even enemy aircraft and submarines. Situations you face and decisions you make suddenly come in quick succession:
The major U.S. Fleet submarine types are represented and accurately profiled for the patrols you will undertake are:
Patrol Assignments include:
The game delivers an historical narrative as 720 ship targets are uniquely identified (including tonnage) with their historical counterparts that were sunk during the war, including freighters, tankers, Japanese submarines, and warships.
Game System Highlights:
You command one of the deadliest submarines in service during World War II. Will you successfully carry out your patrols, advance your crew status, and survive to tell the tale?
Game Components:
Complexity: Low to Moderate
Average Playing Time: Two-Three Hours
Players: One (with options for more players)
Solitaire Suitability: Very High
Replayability: Very High
Credits
DESIGNER: Gregory M. Smith
DISPLAY & COUNTER ART: Ian Wedge
ART DIRECTOR: Rodger B. MacGowan and RBM Studios
RULES EDITOR: Jack Beckman
PRODUCER: John Kranz

SILENT VICTORY, U.S. Submarines in the Pacific, 1941-45  is to be published by Consim Press. Consim Press is a division of ConsimWorld LLC.