Previous product Product 4 of 22 Next product 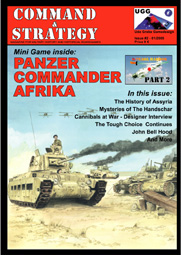 This game is developed from the Collectible Card Game: Tank Commander: The Eastern Front Edition

Panzer Commander Afrika 1940/1941 is a two- (or multi-) player card game covering tactical combat in North Africa (Libya and Egypt) during 1940 and 1941. The game contains 220 cards that represent British, German and Italian forces.
Each vehicle card represents just one tank, half-track, or truck; each infantry card represents one squad of infantry; and each anti-tank gun card represents one AT-gun and its crew. Moreover, there are cards representing typical terrain, equipment and special events.

Each card depicts in full color either a single tank, an infantry squad, an antitank gun, typical terrain, equipment, and special events.
A space on the battle board (your table top) represents roughly 500 by 500 meters and each shot equals five real shots. You will find that your playing time
closely approximates the time it really took to fight these battles in World War II.
PANZER COMMANDER AFRIKA 1940/1941 includes eight different scenarios.

Operation Compass, 1940
In December 1940 the British went over to the offensive and rapidly destroyed the Italian forces in Egypt and Libya.

Sidi Rezegh, 1941
During "Operation Crusader" a wild armored clash took place at and near Sidi Rezegh.

Minefields!
A German armored force has run into a British position
Build Your Own, 1941

Free For All
In this scenario anything is possible - it is not even checked if a unit was available only in 1940 or 1941...

However, the scenario is great fun because all cards are used. In addition, only a minimum of preparation time is needed.
Panzer Commander Afrika uses the system of Tank Commander, The Eastern Front formerly published by Moments in History.