Previous product Product 429 of 849 Next product 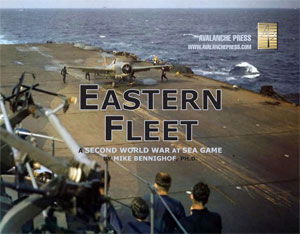 Following their victory at Pearly Harbor, the Imperial Japanese Navy's First Air Fleet moved through the American, Dutch and British colonies of South and East Asia. Having taken the mighty British naval base at Singapore, the next move was to enter the Indian Ocean and challenge the Royal Navy there.

Eastern Fleet is a boxed game in the Second World War at Sea series covering these campaigns. Scenarios range from the Japanese invasions of Burma and the Andaman Islands through the massive carrier raids to the planned but never executed invasion of Ceylon. The Japanese often have overwhelming superiority in the air, which the British must counter with guile while trying to lure the enemy into range of his slow but powerful battleships.

Pieces represent the ships and aircraft that took part in the campaign. The Japanese fleet is built around its five powerful fleet carriers with their deckloads of Zero fighters, Val dive bombers and Kate torpedo bombers, all wielded by expert pilots and crews. They are supported by four fast battle cruisers, fast but lightly protected heavy cruisers and big destroyers armed with the awesome Long Lance torpedo.

The Royal Navy is outnumbered and outgunned in the air, with three fleet carriers — all of them smaller than their Japanese counterparts — and one nearly useless light carrier. The British do have four old and painfully slow R-class battleships and the much more useful Warspite, newly rebuilt in an American shipyard. British cruisers are vastly inferior to those of the Japanese in both numbers and capability, as is the case with the British, Australian and Dutch destroyers.

But this is the Royal Navy, with a tradition of victory and a secret base on which it can fall back in the middle of the supposedly empty Indian Ocean. The British cannot be counted out until their last warship is sunk.

The operational map depicts the eastern half of the Indian Ocean, from southern India to the Straits of Malacca. Like other games in the series, it's divided into an offset grid of sea areas to regulate the movement of ships and aircraft. The tactical map is a generic blue field of hexagons, used to resolve surface combat. There, ships maneuver and fight using their gunnery and torpedo factors. Each player rolls a number of dice according to the ship’s capabilities, hitting on a result of 6. Gunnery and torpedo damage tables give the results: ships can suffer damage to engines, hull or armament. Air attacks are resolved in similar fashion. The combat systems yield results rapidly but in a historically accurate fashion, giving a good balance of fun and insight.

You can read much more about the ships, aircraft, politics and more of Eastern Fleet through these links to our exclusive Daily Content: