Previous product Product 541 of 804 Next product 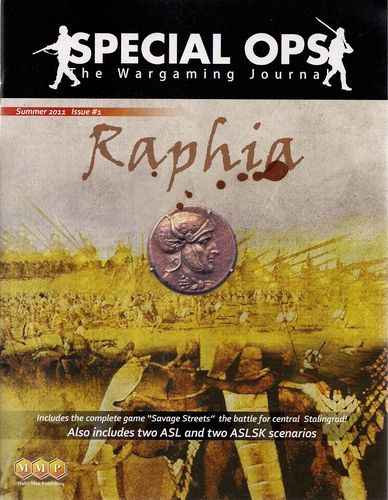 MMP's new wargaming journal is off to a big start with 36 pages of articles and analysis, two brand new games, and four ASL/ASLSK scenarios!

First, Dean Essig for the first time ever takes the Gamers Standard Combat Series (SCS) back in time to the Ancients with Raphia. Rampaging war elephants!

Next, "Mr. Stalingrad" Tom Morin and Nick Richardson offer up the fast-playing and fun Savage Streets. An area-move mini-game covering the epic struggle for central Stalingrad.

The premier issue of Special Ops is jam-packed with strategy and analysis articles for many of MMP's fine games, including: Shifting Sands, ASL, ASL Starter Kit, SCS Gazala, and Baltic Gap. You'll also find an Origins 2009 report, as well as an article about the use of wargames--Fire In The Sky specifically--in the classroom.