Previous product Product 702 of 1210 Next product 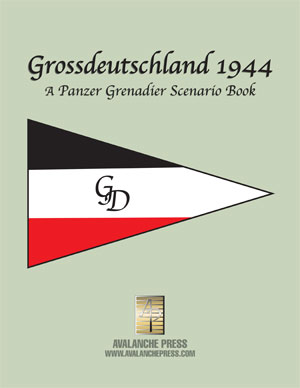 As Germany’s beaten armies stumbled back out of the Soviet Union, Panzer Grenadier Division Grossdeutschland fought to drive back Soviet advances and seal off enemy breakthroughs. As defeat loomed, the division won epic – though ultimately meaningless – victories at places like Târgu Frumos, Cherkassy and East Prussia.

Grossdeutschland 1944 is a supplement for our Panzer Grenadier: Broken Axis game, featuring 64 new die-cut, silky-smooth mounted pieces displaying the division’s units in their own special color scheme. There are also 24 new scenarios for Broken Axis from the April and August 1944 Soviet invasions of Romania, with four “battle games” that link them together.

Grossdeutschland 1944 is not a complete game; everything you need to play all 24 scenarios (and the battle games) in included in the book and the boxed game Broken Axis. No other books or games are required to play any of the scenarios.