Previous product Product 348 of 848 Next product 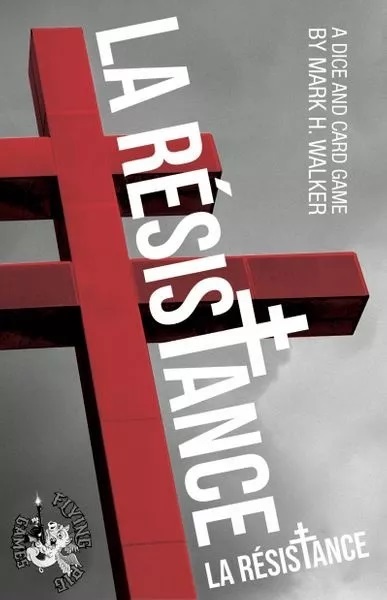 Designed by Mark H. Walker, La Résistance is a simple, yet engaging, dice and card game set during the German occupation of France in World War II. During the occupation, brave French men and women fought against the Nazi conquerors, disrupting their communications, destroying supply warehouses, and ambushing German patrols. La Résistance gives players a chance to lead a band of resistance fighters, working to keep their men and women alive as they also strive to become the most famous resistance leader.

On each turn, a player will roll six dice, placing the dice on mission cards common to all players, he or she attempts to defeat the mission card by matching dice on the card, spending recruits, and using their resistance leader’s special abilities. To win, a player must amass 12 Glory Points or break--by stealing or otherwise removing all rival resistance group members—the other resistance bands. La Résistance mixes elements of popular dice games, such as Yahtzee and King of Tokyo, with “take that” card mechanics and player interaction, giving the game a familiar feel.

The game is historically themed, and a great way to introduce gamers to strategy games. Three to five people may play, so La Résistance is great for game nights and family get-togethers.  Coming to Kickstarter this December, and shipping worldwide in April, La Résistance is a great strategy game for wargamers and casual strategy gamers alike.