This online shop is using cookies to give you the best shopping expierience. Thereby for example the session information or language setting are stored on your computer. Without cookies the range of the online shop's functionality is limited. If you do not agree, please click here. x
You are here: / By Manufacturer / New England Simulations
Back to overview 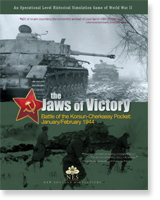 The Jaws of Victory is a 2-map simulation of the January-February 1944 battle of the Korsun-Cherkassy Pocket that took place in the Ukraine. It’s a classic pincer movement by two Soviet Armies that pocketed two German Korps. The Germans soon counterattacked with seven Panzer divisions in an attempt to relieve the pocket. The relief effort came close to success, but ultimately failed. The trapped units eventually broke out while incurring significant losses.

The Jaws of Victory is an exciting, balanced battle with both sides having an opportunity for decisive results…. lots of Soviet tank corps and German panzer division action.

Game System: East Front adaptation of “The Killing Ground” with some differences & additions
Differences include:
• ZOC/ZOI: A ZOC (zone-of-control) or ZOI (zones-of-influence) is determined by the number of infantry steps in a hex. ZOC to ZOC movement is allowed by Germans only; ZOI to ZOI movement is allowed for all units.
• Simplified air availability (only support to combat)