Previous product Product 63 of 98 Next product 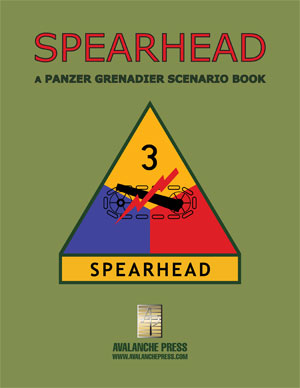 Formed during the U.S. Army’s 1941 pre-war expansion, the Third Armored Division fought its way from Normandy deep into Germany. Breaking German resistance, the division suffered enormous casualties – over 16,000 of them, 2,500 of them killed in action (including division commander Maurice Rose). Late in the war, the division took the name “Spearhead” to note its achievements.

Spearhead Division is a supplement for our Panzer Grenadier: Elsenborn Ridge game, featuring 88 new die-cut, mounted pieces displaying the division’s units in their own special color scheme. There are also 25 scenarios, and with four “battle games” that link them together.

Spearhead Division is not a complete game; everything you need to play all 25 scenarios (and the battle games) in included in the book and the boxed game Elsenborn Ridge. No other books or games are required to play any of the scenarios.