Previous product Product 232 of 795 Next product 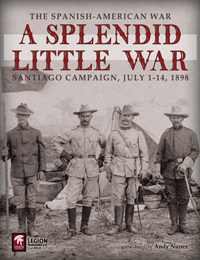 A Splendid Little War: The 1898 Santiago Campaign' deals with all aspects of the Santiago Cuba Campaign of 1898. The game covers the entire campaign and includes the Rough Riders, Cuban (and Spanish) Guerillas, Gatling Guns, the US Observation Balloon, Engineers, and just about everything in between. Most of the units are regiments and battalions, and the US regiments can break down into quasi battalion sized units in order to trade off strength for speed, and also to absorb combat loses. The US, with more firepower and better artillery, has the upper hand but the dug in Spanish defenders, the Spanish relief column's arrival, and the ensuing Yellow fever will take its toll on the US forces and could turn a Splendid Little War into defeat.

There are three short scenarios covering the major engagements of the campaign:
- The battle for El Caney.
- The infamous Rough Riders and the battle of San Juan Hill.
- The combination of these two that covers the first day of the campaign.

As well as the Campaign Game which covers the entire 14 days of battle from the initial US attack on July 1st until the Spanish surrender on July 14th.