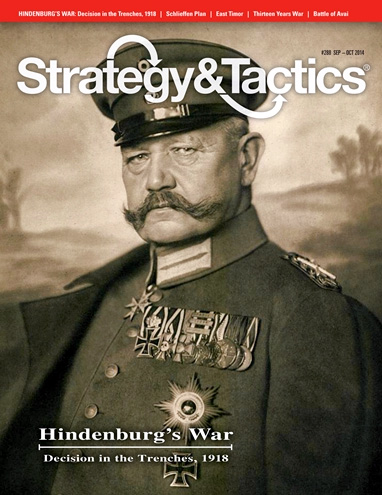 Hindenburg’s War: Decision in the Trenches, 1918 (HW) is a strategic-level, two-player wargame of low complexity that covers the fighting on World War I’s western front during that final year of the war, from the start of the first German offensive on 21 March through Armistice Day on 11 November. The game’s sub-systems are crafted to present a supreme-commander’s-eye-view of the war: it is therefore almost fully strategic in its perspective, with only the most pastel of operational undertones added to enhance historical tone and texture.

Each hex on the map represents 9.31 miles (15 km) when measured from side to opposite side. Each full turn of play, other than the first and last, represents half-a-month. Every combat unit in the game represents one division of infantry or one brigade of tanks.