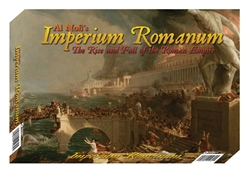 Al Nofi's Imperium Romanum - The Rise and Fall of the Roman Empire is an update to the classic game of the Roman Empire by Al Nofi. The rules cover the intricacies of the political, economic, and military conflicts of the Roman world from the first century BC to its fall nearly 700 years later. The game includes over 40 scenarios, with six new scenarios and three introductory scenarios. Scenarios range from the Mithridatic wars (88-63 BC) through more than six centuries of greatness and decline to the final burst of glory in the last Romano-Persian War (AD 622-629). Two to six persons may play, depending on the scenario chosen. Scale is 50 miles to the hex and each unit represents Legions and Fleets. Most leader counters are named and represent individual leaders and their staffs.

Imperium Romanum includes counter graphics with all units displayed in a neutral color while the players use leader and control markers to show the forces each faction controls. The maps are enlarged and have a directory of all provinces with their cultivated and road status depicted for each scenario. The rules are updated with a new format and include new optional rules designed to give all players more detail in the military, logistical and political actions of the game.