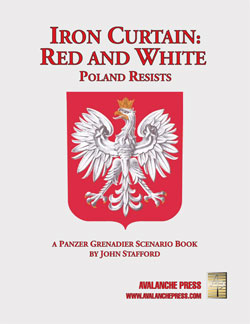 Shortly after the Allies jointly vanquished Nazi terror, the former partners settled into two mutually opposing camps and began a four-decade-long Cold War. At the heart of that protracted struggle lay the fate of the central and eastern European countries "liberated" by the Soviet Union. One of those unfortunate countries, Poland, had been cynically divided between the Soviet Union and Nazi Germany via the Molotov–Ribbentrop Pact, as the opener for World War II. Despite the valor and sacrifice of over 200,000 Poles fighting for the Allies, their interests were betrayed at the Yalta and Potsdam conference, and as a consequence, the Soviet Union ruled Poland through a puppet Socialist government for the next 45 years.

Unlike most other Panzer Grenadier titles, Red & White explores one of the "what ifs" of history; in this case, what if the Poles had been able to return home and set up their own government in the postwar era? Looking at the turbulent history of uprisings in the territories under Soviet rule, perhaps a conflict would have emerged pitting a rearmed Poland, supported again by America and the rest of NATO, against the Red Army. We offer you some more historical background, and 40 scenarios to see if Poland can keep its sovereignty against the Soviet Union.

Red & White includes 77 mounted and die-cut Polish playing pieces. The 40 scenarios require the use of the pieces and boards from our Cassino, Elsenborn Ridge, Hammer & Sickle, Patton's Nightmare and Road to Berlin games.