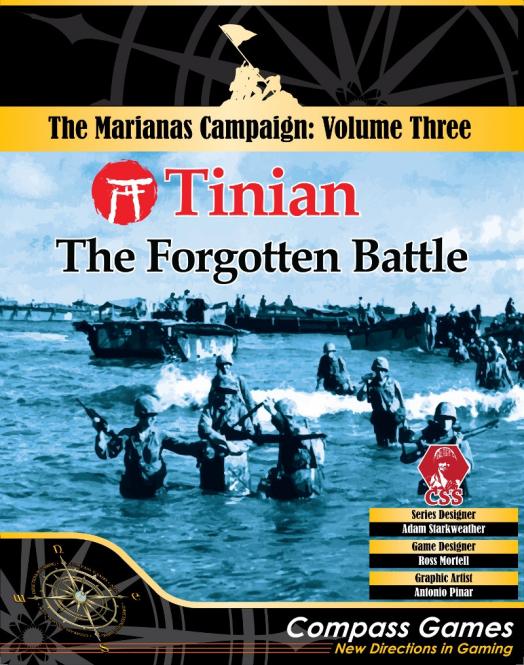 Most people have never heard of the Battle of Tinian. Overshadowed by the Battle of Saipan to the north and the Invasion of Guam to the south, Tinian seems like a small side show that had no real impact on the war. Some people may hear the name and remember that the B-29s, the ones that dropped the atomic bombs on Japan, flew from there but for the rest it has become a minor part of military history - a forgotten battle.

And yet Admiral Raymond A. Spruance, said of the invasion of Tinian:
"In my opinion, the Tinian operation was probably the most brilliantly conceived and executed amphibious operation in World War II."

Tinian: The Forgotten Battle will be Volume 3 in the Marianas Campaign and is a perfect introduction to Adam Starkweather's Company Scale System (CSS).  Played on a single map it will include 3 scenarios and 3 campaign games.

‘Lasso’ A 2 day scenario covering the Americans securing of the north end of the
island down as far as Mount Lasso.

‘Final Round-up’ A 3 day Scenario covering the last 3 days of the battle and the final
subjugation of the island.

Hypothetical Campaign. The Americans, originally, feinted at the southern beaches near Tinian Town before landing in the north. This campaign game lets you see what would have happened if it wasn't a feint and the Americans landed exactly where the Japanese were expecting them to.