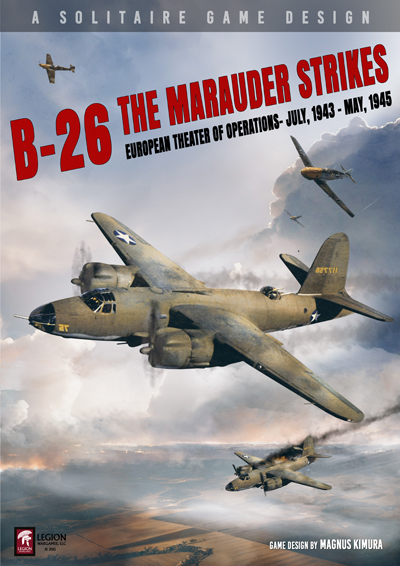 The B-26 has arrived in the European Theater of Operations. It has now joined the B-17, B-24 and the Lancaster over the skies of war torn Europe...

B-26: The Marauder Strikes! is a solitaire game set onboard a Martin B-26 Marauder medium bomber during World War Two in the European Theater of Operations from July 1943 until the end of the war in May 1945. It

is a big game in that there are many target lists, rules, mission maps and details which are not found in B-17: Queen of the Skies or B-29 Superfortress: Bombers over Japan. For example, the Damage Tables are more detailed than the earlier games and the combat system is similar, but completely new. The Target Lists include a large selection of targets attacked by B-26s from July 1943 until the end of the war in May 1945 and are placed on 13 maps (Movement Boards) which are different depending on where your base is located, from England to the Netherlands. Different models of the B-26 is also included from the early B-26 in 1941 until the B-26G which entered combat in October 1944. The earlier models are not used in the European Theater of Operations (the ETO) in which B-26: The Marauder Strikes! is set, but will be used in 22nd Bomb Group: Marauders from Australia, an add-on variant set in the Pacific in the war against Japan in New Guinea.

Martin B-26 Marauder: The Wingless Wonder was the name of a variant of Avalon Hill's B-17: Queen of the Skies solitaire boardgame. A draft of B-26 was available for play testing which used the B-17: Queen of the Skies rules and B-17 was needed to play. Everything has changed since then, and B-26: The Marauder Strikes! has completely new mechanics and is a stand alone game.

Players familiar with B-17: Queen of the Skies or B-29 Superfortress: Bombers over Japan recognize the mechanics used in B-26. One or more 6-sided dice are rolled on tables to plan the mission, to determine if enemy fighters appear, to hit with machine gun fire and to determine damage and wounds and much more. In some ways it can be quicker to play a mission, but at the same time it can seem to be “dice-e-er” than its companions. B-26 is, with its advanced and optional guidelines, deep, detailed and complex, but still as easy to play as B-17 or B-29 with its basic system which is similar to the mechanics in B-17 or B-29.

You can begin your campaign flying missions from bases in England or jump in later in the war when the B-26 groups had moved to the continent and you will find Mission Maps with your station either in England, France, Belgium or the Netherlands depending on when you fly your missions. Put together a crew, name your B-26 and fly missions over France, Belgium, the Netherlands, Luxembourg, Germany, Austria and Czechoslovakia!