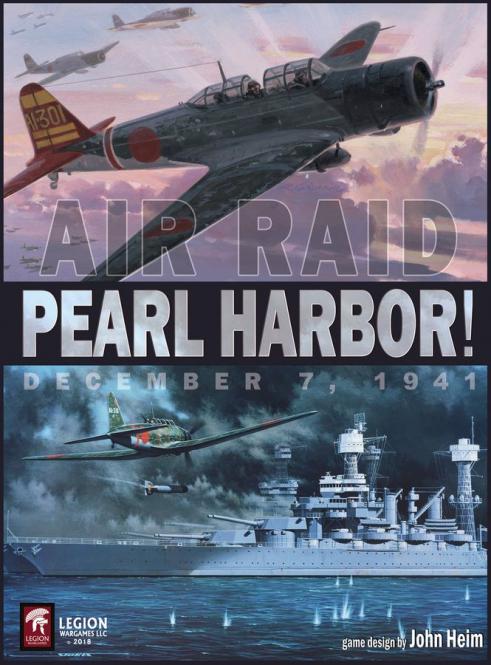 The Japanese attack on Pearl Harbor was an incredible watershed in American and even world history. In the moment of what appeared to be a disastrous defeat, the United States involuntarily began to transform its enormous potential into the reality of being the greatest power in the world. Two separate wars were joined by the attack into the most terrible global conflict yet seen.

Air Raid – Pearl Harbor! is a detailed simulation and study of an iconic event in U.S. and, indeed, world history. It is an extensively researched wargame inspired by the nearly life-long interest of the designer in the subject matter.

Units are individual ships and also individual aircraft, although these are amalgamated into various counters by aircraft type. There is area movement for some portions of the map, and the areas of particular interest are modelled using 250-yard-wide hexes.

The simulation is detailed but not overly complex and includes various subsystems to render results for air-to-air, air-to-ground/ship, anti-aircraft, and also anti-submarine operations, to engage any full-size and/or midget Japanese submarines brought into action.

The initial scenario may be played by two players, although it is designed to be a solitaire introduction to the system and also a way to let players experience and study this historic battle, to give insight into much of what happened and why. The likelihood is that you will achieve the historical result, a Japanese Tactical Victory.

The standard scenario presents all of the forces available to both sides and allows the Japanese player to modify his or her deployment and attack plans up to and including the composition of the two attack waves. If you think you can plan a more successful attack than Minoru Genda did, you have here the tools to try.

Conversely, the U.S. player has the opportunity to fight back to the best of his or her ability, and various optional rules – particularly variations in the initial Alert Level – give the U.S. player more assets with which to fight and more assets to save through evacuation. There is also a scenario which has one or two American aircraft carriers in port and your initial thought is probably that this is a huge bonus toward Strategic Victory for the Japanese.

However, the main Japanese player dilemma of this simulation is that the Japanese have a finite amount of aircraft and ordnance, and more targets are not necessarily a guarantee of victory. You will find that you need to target appropriately and generally roll for damage well in order to successfully hit everything you need to hit. The options allowing a third strike later in the day or the next day are a gamble – you can strike again, but at a fully alerted, albeit weakened, set of targets and you risk losing more aircraft, which equal Victory Points for the U.S.